what3words has made it possible to identify and easily communicate any location, precise to a 3m x 3m square 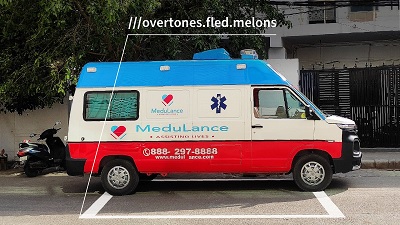 Medulance has announced the successful rollout of what3words. With the free what3words app, patients can identify and share exactly where assistance is needed, even in areas with no or weak data connection. what3words has made it possible to identify and easily communicate any location, precise to a 3m x 3m square. With the technology, Medulance has reduced its emergency response time from 35 minutes to 11 minutes on average, and in some cases, dispatch teams in Delhi have arrived at an incident in under ten minutes.

what3words has divided the globe into a grid of 3m x 3m squares and given each square a unique combination of three random words: a what3words address. what3words can also be used via the online map at what3words.com.

The technology is available in over 50 languages, including 12 South Asian languages: Hindi, Marathi, Tamil, Telugu, Bengali, Kannada, Nepali, Urdu, Gujarati, Malayalam, Odia, and Punjabi. If a caller doesn’t have the what3words app, call handlers can share an SMS with a link to what3words.com which allows the caller to retrieve the what3words address for their exact location and recite it over the phone. The technology will save dispatchers and responders precious time and resources in an emergency, and in some cases, save lives.

The what3words technology is already being used by over 120 emergency services control centres around the world in the UK, the US, Australia, Germany, France, Belgium, Austria, Singapore, Canada, India, and South Africa to locate people in need.