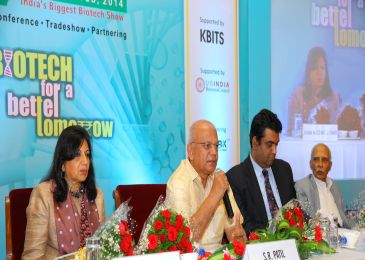 The Department of Information Technology, Biotechnology and Science & Technology, Government of Karnataka, Vision Group on Biotechnology and MM Activ Sci-Tech Communications on September 27th, 2013, announced that Bangalore INDIA BIO (BIB) 2014, with the core theme, 'Biotech for a Better Tomorrow', will be held from February 10-12, 2014, at The Lalit Ashok, Bangalore.

The announcement was made by Shri S R Patil, Hon'ble Minister for IT, Biotech and S&T, Planning and Statistics, Government of Karnataka, in the presence of Dr Kiran Mazumdar-shaw, Chairperson, Karnataka's Vision Group on Biotechnology & CMD, Biocon Ltd., Mr Srivatsa Krishna, IAS, Secretary to Government, Department of Information Technology, Biotechnology and Science & Technology and industry representatives.

Dr Kiran Mazumdar-Shaw addressed the gathering by speaking on the future prospects of biotech industry. She said, "Biotechnology, for a country like India, ensures food security, health security and energy security. Environmental sustainability is something that is gaining a lot of momentum. Bangalore is at an advantageous position in this sector. I believe that the biotech sector has been handcuffed and made to run on regulations which has been very draconian, and we need to fight for regulatory norms that allows us to build this sector."

Mr Srivatsa Krishna added that today's biotechnology can become the IT of tomorrow. He said, "Karnataka is India's IT and biotech capital. The IT industry in India today is worth Rs 6.43 lakh crore and the biotech industry in comparison is Rs 23,500 crore. I see no reason why today's biotechnology can't become the IT of tomorrow. IT has a road map which the biotech industry can emulate and exceed."

Shri S R Patil added that this flagship event will provide institutes, organizations and companies to showcase their services. "The biotech sector in Karnataka enjoys a comfortable position in terms of revenues. The state is home to about 52 percent of pure biotechnology companies. Out of the top ten biotechnology companies in India, five of them are located in Bangalore. The IT capital has emerged as the science capital of India. Thanks to the biotechnology sector."

Dr Kiran believes that biotech has the power to be the second green revolution for our economy. She said, "It will address profitability challenges among others that farmers face in terms of financial viability. India has clearly become the vaccine hub of the world and we can become the hub for biologics as well. Biotechnology addresses our large unmet medical needs. What conventional Allopathic medicine has not addressed till date, many immunological and chronic diseases like cancer and diabetes, is now being addressed by biotechnology. Biotech has played a phenomenal role in addressing cancer and auto-immune diseases, which has led to a cure which could not be imagined before."

Mr Patil further expressed, "Our focus now is on building necessary human resources and infrastructure for the biotech industry. This event will provide an opportunity for students pursuing biotechnology as a career. The youngsters will be inspired by senior and global scientists who will be present at the event. More than any other state, the Karnataka government has invested more in the biotech field. We want to give more importance to bioagriculture to empower farmers' living standards because our economy is dependent on agriculture, which is our backbone."

Talking about Karnataka's biotechnology ecosystem, Mr Srivatsa said, "We have some of the finest quality research laboratories which has to be leveraged, and create the same magic like the IT industry." Emphasizing on bioagriculture, he further added, "For every single biotech investment, Bangalore should be the most preferred destination. People in India are sustained by agriculture and farming. Biotechnology offers the hope and promise that nothing else did for many years. Biotech can empower and enable farmers, whose life and livelihood depend on agriculture for a far better life."

In the area of biofuels, Dr Kiran pointed out that we have become energy dependent and that reliance on fossil fuels is causing financial strain on the system. She said, "Our current account deficit is also facing problems because of importing fossil fuels. Biofuel is a big area for India. There are many companies looking for harnessing biofuels. There is a lot of untapped sources like algae biomass and bioethanol which has to be considered. This is what will build the bio-economy, which will enable India to address all its present day challenges."

"There are very interesting start-up companies in Bangalore. All the knowledge from medical device companies like GE, Philips and Siemens will enable Bangalore to become an important medical devices destination." She also opined that agri-biotech is pursued on a very different scale in many parts of Karnataka and marine biotechnology will have important focus in the future.

Dr Kiran concluded by saying, "This Bangalore INDIA BIO 2014 is going to be an interesting and engaging event, where we expect participants from all over the world, bringing together delegates, experts and companies. We expect to have a large number of eminent speakers, making this event a big success. India is becoming a very credible biotechnology destination and it has a great role to play. We'll develop a strong leadership position in the biotech industry in every aspect of what it has to offer."

The Bangalore INDIA BIO 2014 will host multi-track conferences, international tradeshow, distinguished lectures and talks, interlinX biopartnering, CEO conclave, bio excellence awards, bioquiz and other networking events. The conference is expected to have 25 conference sessions, about 100 exhibitors and 3000 plus business visitors. Representatives from nearly 15 countries are also anticipated to attend this event.