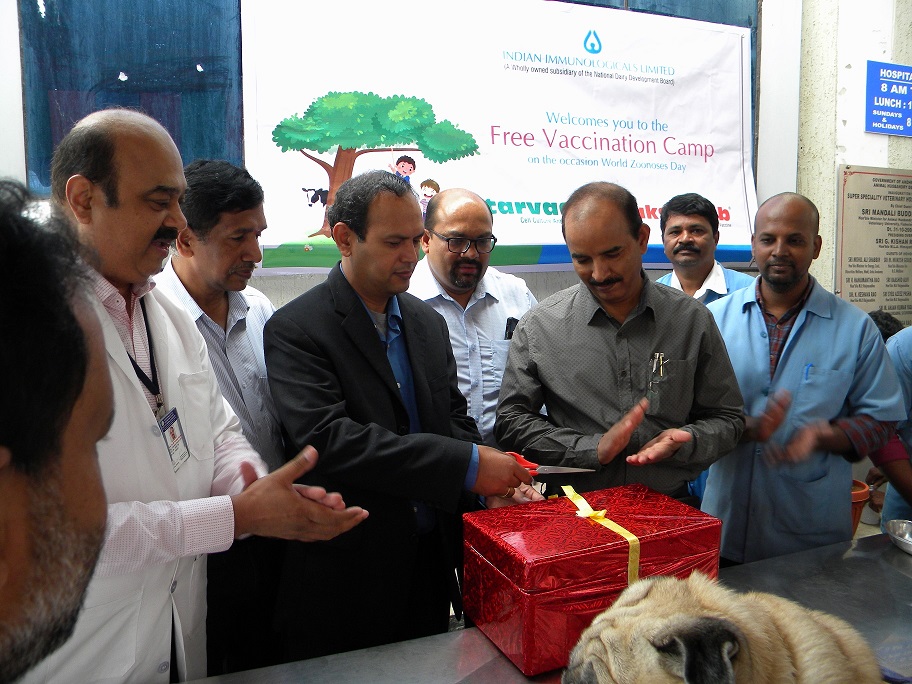 Indian Immunologicals Limited (IIL), a leading biologicals company, recently organized free Vaccination Camps in over 170 centres across the country. The market leader in veterinary biologicals and one of the largest animals & human health players in India, IIL has been organizing these Vaccination and Rabies awareness camps at Veterinary dispensaries, NGOs and Veterinarians across the country every year on “World Zoonosis Day” which is observed every year on the 6th of July. Around 50,000 doses of RAKSHARAB (anti-rabies vaccine) produced by IIL was administered free of cost in as many as 20 states and Union Territories through veterinary dispensaries, NGOs etc.
Diseases that transmit from animals to human beings are called Zoonotic diseases and 70% of all emerging diseases that affect humans are zoonotic in nature. In India, occurrence of Rabies is prevalent and accounts for more than 90% of all zoonotic cases reported in the country. The World Health Organisation (WHO) estimates around 1.75 million dog bite cases every year causing around 59,000 deaths worldwide each year with majority of cases (95%) taking place in Africa and Asia. A 2015 study, published in peer-reviewed PLOS Neglected Tropical Diseases estimates about 20,800 rabies deaths every year in India - the highest in the world at 36% of total deaths due to rabies.
The economic cost of dog mediated rabies has been estimated to be $ 8.6 billion. The high incidence of rabies in India is due to large uncontrolled stray dog population in India. Stray dogs account for nearly 80% of the canine population in India. There are several reasons for the high incidence including poor vaccination. Prophylaxis through vaccination is the most cost-effective intervention to reduce incidence of disease. Several countries have been able to reduce the number of rabies related human deaths through vaccination of dogs.
On the occasion of World Zoonosis Day, Dr.K. Anand Kumar, Managing Director, Indian Immunologicals Limited said, “IIL is truly a One Health company, playing a significant role in providing cost effective tools for the control of various zoonotic diseases in the country including the dreaded Rabies. Working with various other stake holders including the common public, IIL is determined to eradicate disease.”
“IIL wishes to spread the message that preventive vaccination is a proven and cost-effective means to minimize incidence of zoonotic diseases. Effective implementation of Swachh Bharat programme and preventive vaccination would vastly improve the health status of the country,” added Dr. Prasanna Deshpande, Deputy Managing Director, Indian Immunologicals Limited.
In addition to Rabies, other Zoonotic diseases such as Brucellosis, Leptospirosis, Swine Flu, Porcine Cysticercosis, Nipah, Zika etc. also affect human beings. Awareness, accurate diagnosis, improvement in sanitary conditions, prophylactic vaccination are all measures that need to be taken to restrain/eradicate spread.
Indian Immunologicals Limited (a subsidiary company of National Dairy Development Board) is leading biologicals manufacturer. Through extensive research, the company has delivered affordable vaccines for the consumers in India. IIL continues to be a leading manufacturer of animal rabies vaccine (Raksharab) and human rabies vaccine (Abhayrab) in the country. IIL’s CYSVAX is the world’s first vaccine for Porcine Cysticercosis in Pigs. Cysticercosis is a very important zoonotic disease and it is understood that it is a prime cause of epilepsy in humans. Vaccinating Pigs against Porcine Cysticercosis can help significantly reduce the incidence of epilepsy in humans.