The 2 day Conference and the third day of Tutorial will be addressing the latest trends in Nanotechnology focusing on Nano-sensors, Nano in Energy Sector, Nano Manufacturing & Scalability and Nano-Medicine. 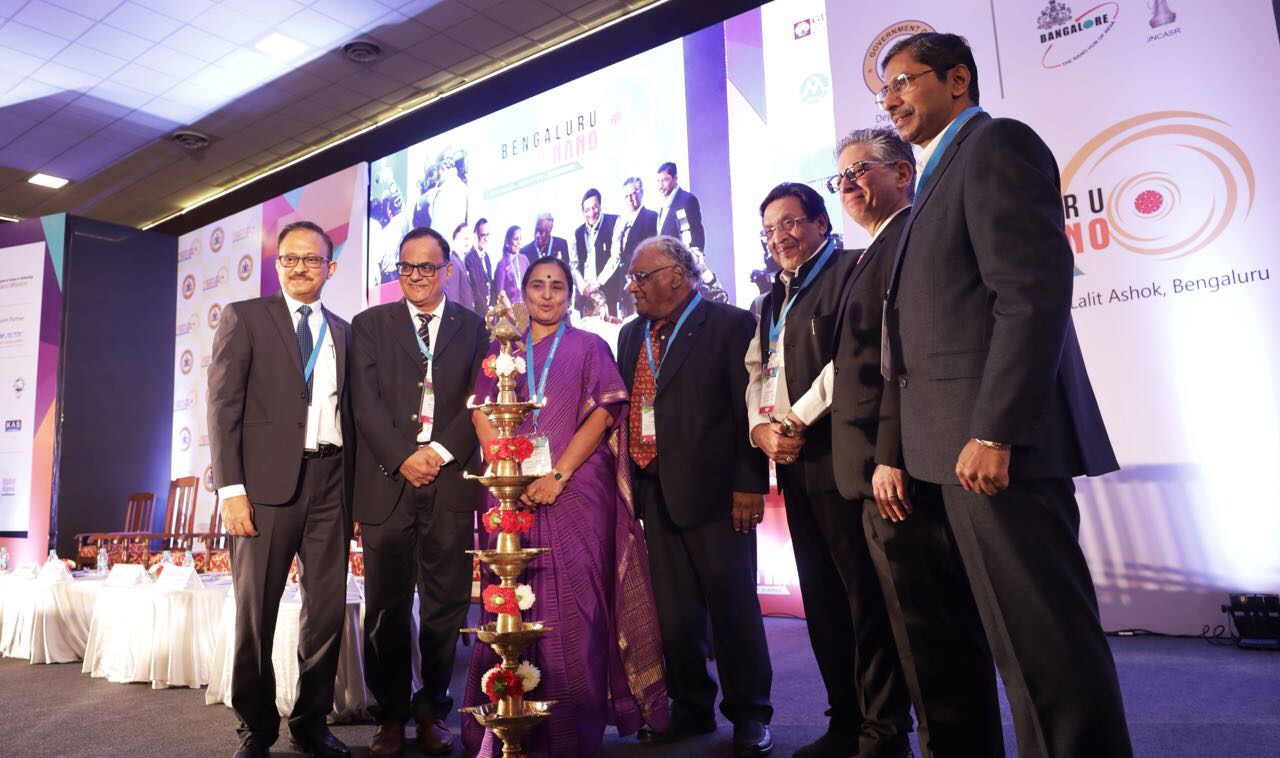 India's pioneering Nano-science and Nanotechnology Event, Bengaluru India Nano 2017 enters the 9th edition willing to surpass all preceding versions. Industry, Research, Academia & students interaction is organized by the Department of IT, BT, S&T, Government of Karnataka and Jawaharlal Nehru Center for Advanced Scientific Research, Karnataka Vision group on Nanotechnology and MM Activ Sci Tech Communications, the event will be continued till the 8th of December with Post-Conference Tutorials on December 9, 2017 at The Lalit Ashok, Bengaluru.


Speaking at the inaugural Prof. A. K. Sood, FRS, President, INSA & Professor, Indian Institute of Science, Bengaluru gave an overview “We have 4 key themes and 4 eminent keynote speakers who will cover all the contemporary aspects of nano technology, Spark X is for encouraging and even to excite the young in the field of nano technology. And we have selected 10 young minds from an array of student to appreciate their achievement.”

He further added, we have already registered about 50 domain experts presenting in various sessions from India and around 10 international delegates representing their area of expertise in various sessions. More than 600 delegates, with more than 500 student registration and about 50 stalls as well as 96 poster presentation in the exhibition has  confirmed many more footfalls in the Bengaluru India Nano 2017.

“The more work you do in Nano the more possibilities coming up in this field.  Since the last time two new nano institute have been Started in India in Bengaluru and Chandigarh.  We are very hopeful the institute will contribute tremendously to the industry who is showing great interest in the nano industry”, said Prof. C.N.R. Rao, FRS, Linus Pauling Research Professor; Honorary President, JNCASR; Chairman, Vision Group on Science & Technology; Chairman, Vision Group on Nanotechnology, Government of Karnataka. He also added that “Any new thing grows from a seed to a tree then it becomes a forest then it becomes a continent. NanoScience is also like that, thus I am glad to be a part of this endeavor.

Prof. Paul S. Weiss, UC Presidential Chair; Distinguished, Professor of Chemistry & Biochemistry; Distinguished Professor of Materials Science &amp; Engineering, California Nano Systems Institute, University of California, Los Angeles, USA mentioned that “ The world is in a paralysis state at the present, science can bridge this gap that we have created. The involvement of politicians of different country comes into power here as today we all have this special opportunity that has been created.

“Bengaluru is gaining strong foothold in the emerging field of nanotechnology, which is considered as the next big technological revolution and enormous scope for its commercial expansion”, said Shri M. R. Seetharam, Hon’ble Minister for Planning, Statistics and Science &amp; Technology, Government of Karnataka. He added by saying “To create awareness about astronomical concepts and to help students to learn science, technology, engineering and mathematics, we are establishing first 3D planetarium with state-of-the-art projection systems in Mangalore at an estimated cost of Rs. 35.69 crores. This planetarium will be open to the public in January 2018. Also, we are taking action to establish 5 more mini planetariums; one each in Dharwad, Bagalkot, Vijayapura, Madikeri and Gadag. We have also upgraded Jawaharlal Nehru planetarium with a modern projection system at a cost of Rs. 12.00 crores as per the present day requirements.”

Attending her first event after being assigned as the Chief Secretory Smt. K. Ratnaprabha, IAS thanked the Science and Technology Dept., Government of Karnataka for creating this opportunity for the scientific community also, all the stake holders through Bengaluru India Nano 2017, she said “Karnataka is the top destination for investment according to the study on September 2017 by DIPP, and one of the reason is our R&D sector.”

The 2 day Conference and the third day of Tutorial will be addressing the latest trends in Nanotechnology focusing on Nano-sensors, Nano in Energy Sector, Nano Manufacturing & Scalability and Nano-Medicine. The Post Conference Tutorials would cover Nano Fabrication Technologies; Surface Probe Microscopy and Bioimaging. The RICH Forum (Research Industry Collaboration Hub) will witness presentations on emerging nanotechnologies, which can be commercialized. Nano SparX is the new feature that has been added in the previous year which will showcase emerging business ideas by start-ups and young researchers. All in all,  Bengaluru India Nano 2017 will be addressed by over 30 Speakers spread across 13+ Sessions and will see participation of over 500 delegates from Industry, Academia and Research as well as representation from multiple countries including USA, Japan, UK and Korea.

The key features would be the Nano Exhibition with the DST NANO MISSION Pavilion that will showcase the finest of the emerging technologies. The other significant feature of the event would be the Nano Excellence Awards including prestigious Prof. C.N.R. Rao Bengaluru INDIA NANO Science Award.

The session on Nano for the Young is organized exclusively for degree students aimed at popularizing nanoscience among them, so as to attract to the field of Nanotechnology.  The programme will be attended by over 400 under graduate students of science and engineering.

·        NanoSparX is a special highlight contest conceptualized to encourage and enthuse young students to think about innovative solutions based on nanotechnology for any problem of social relevance. This contest is about ideas that can be pursued for feasibility study within a short time.

·        The top two ideas will be given awards of INR 50000 each. The Award Committee will also suggest possible mentors for the award winning teams if they do not have one already.

·        Poster Presentation is aimed at generating new breakthrough ideas in Nanotechnology and helping put these ideas into practice through interaction of poster presenters with distinguished visitors from industry, research organizations and the investment community seeking cutting edge innovations, solutions and collaborations.