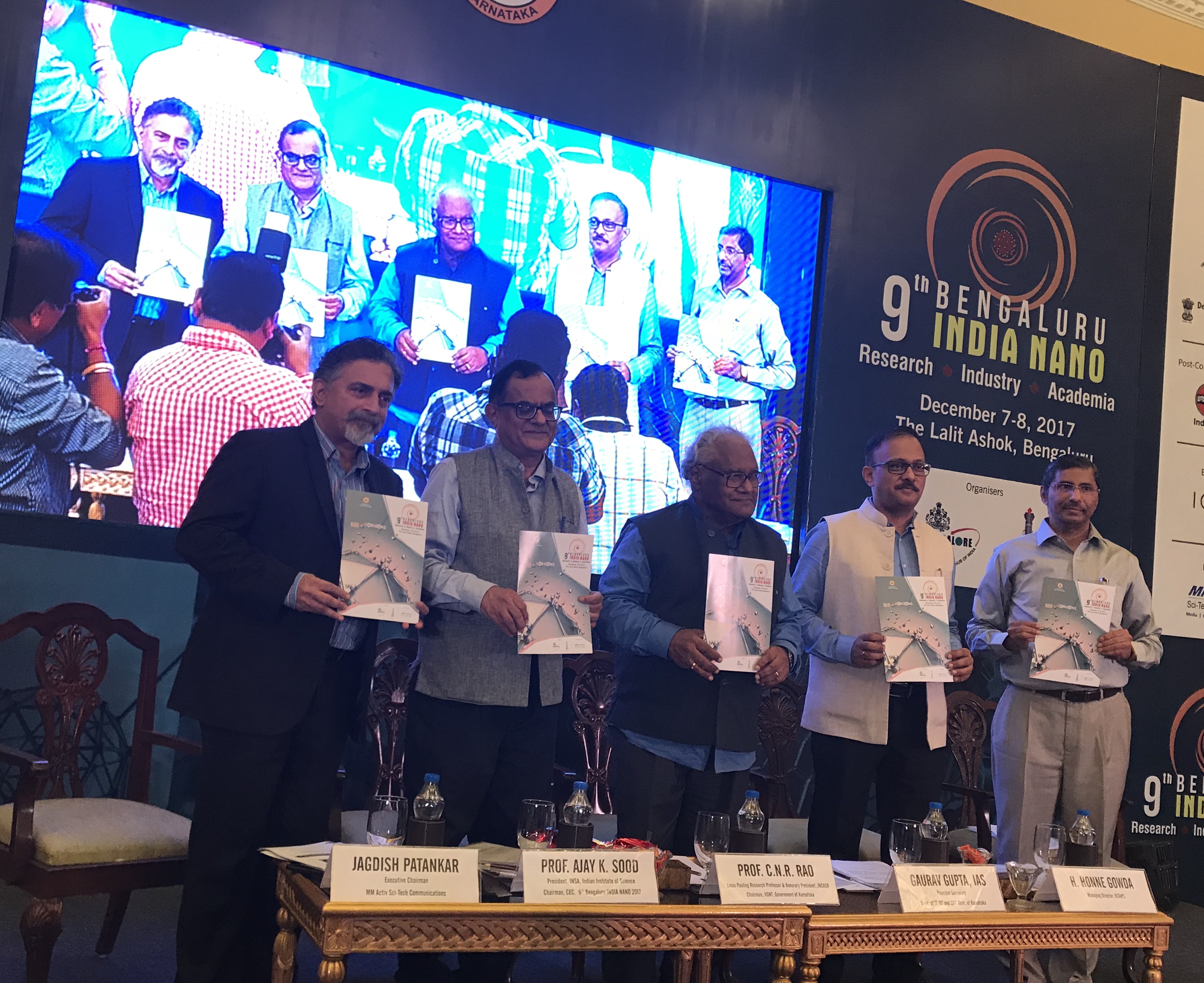 The 9th edition of India's premier Nano-science and Nanotechnology Event Bengaluru India Nano 2017 will be held between December 7 & 8, 2017, with Post-Conference Tutorials on December 9, 2017 at The Lalit Ashok, Bengaluru.
Prof. C.N.R. Rao, Chairman of Karnataka’s Vision Group on Nanotechnology, at the curtain raiser and press interaction, unveiled the event spectrum with the core Theme “Nano Horizons” that promises to delve deep into advancements in nano-science and technology and its impact on various Industry sectors. The Press Conference was also addressed by Mr. Gaurav Gupta, IAS, Principal Secretary, Department of IT, BT and S&T, Government of Karnataka alongside Prof. Ajay Kumar Sood, FRS, Chairman, Conference Executive Committee, Bengaluru INDIA NANO Event and President, INSA & Professor, Indian Institute of Science, Bengaluru.
This unique event which has emerged as a leading forum for Industry, Research, Academia & students interaction is organized by the Department of IT, BT, S&T, Government of Karnataka and Jawaharlal Nehru Centre for Advanced Scientific Research, Karnataka Vision group on Nanotechnology and MM Activ Sci Tech Communications.
Prof. C.N.R. Rao said, “In 2007, when we launched the Nanotech Event in India, not many people believed that nanoscience could deliver the next generation of technologies. However, today the world is witnessing the promise of nanotechnology across verticals, such as engineering, medicine, energy, transportation and communication, to name a few. Our endeavour has always been to create an ecosystem that brings together the best minds from the industry, research and academia, globally, on a single platform. And with the able support of the Karnataka Government, we are proud to recognize and encourage new talents in this ever-evolving field.”
Mr. Gaurav Gupta further added, “Internationally, Karnataka is recognized as the IT capital of India, but we are so much more. The Government of Karnataka has been making constant efforts to boost scientific research and development, especially in exciting areas like nanoscience and nanotechnology. With ‘Nano Horizons’ as the core theme of Bengaluru India Nano 2017, we will be looking at the latest industry trends as well as emerging business ideas by start-ups and young researchers.”
Prof. Ajay K. Sood, President, INSA, spoke about the four major themes of the event- Nanosensors, Nano in Energy Sector, Nano Manufacturing & Scalability and Nano-Medicine.
The Post Conference Tutorials would cover Nano Fabrication Technologies; Surface Probe Microscopy and Bioimaging. The RICH Forum (Research Industry Collaboration Hub) will witness presentations on emerging nanotechnologies, which can be commercialized.
Nano SparX is the new feature that has been added in the previous year will showcase emerging business ideas by start-ups and young researchers. All in all,  Bengaluru India Nano 2017 will be addressed by over 30 Speakers spread across 13+ Sessions and will see participation of over 500 delegates from Industry, Academia and Research as well as representation from multiple countries including USA, Japan, UK and Korea.
The Nano Exhibition will include The DST NANO MISSION Pavilion that will showcase emerging technologies and companies as well as Institutes of National Importance like IITs, NIT, IISc, INST and so on. The event will also feature poster presentations by researchers and graduate students from leading institutes across India.
The other significant feature of the event would be the Nano Excellence Awards including prestigious Prof. C.N.R. Rao Bengaluru INDIA NANO Science Award; Bengaluru INDIA NANO Innovation Award; Malhotra Weikfield Foundation Nano Science Fellowship Awards; Best Poster Awards, Nano SparX Awards and Best Exhibitor Awards.
The session on Nano for the Young is organized exclusively for degree students aimed at popularizing nano-science among them, so as to attract to the field of Nanotechnology.  The programme will be attended by over 400 under graduate students of science and engineering.