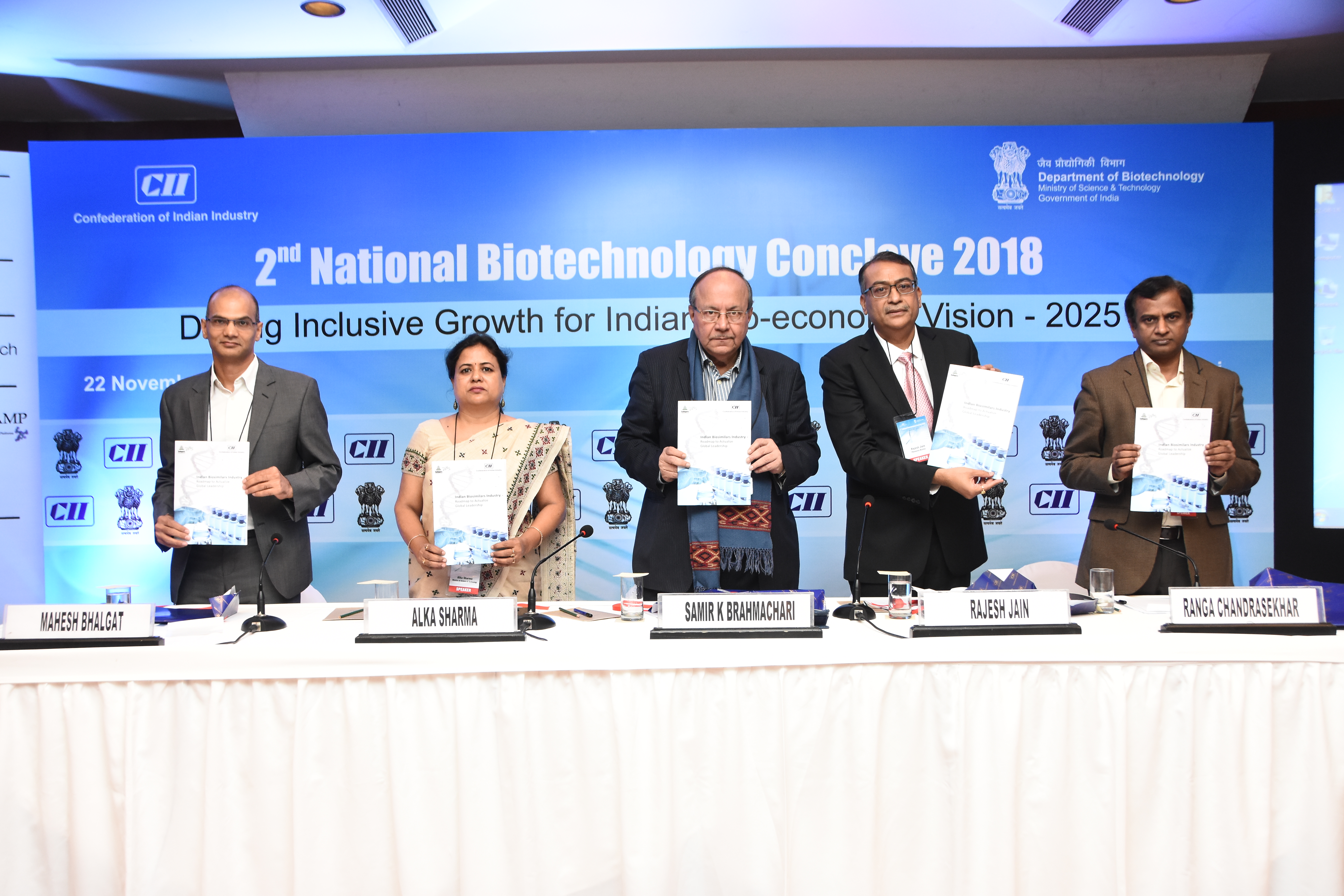 The 2nd National Biotechnology Conclave was recently organized by the Confederation of Indian Industry (CII) in partnership with the Department of Biotechnology, Ministry of Science and Technology in New Delhi.

The theme of the conference was ‘Driving inclusive growth for India Bio-economy Vision-2025’.

Dr Alka Sharma revisited biotechnology strategy in 2015, key components being innovation and entrepreneurship and said, “Government is making several efforts towards achieving the bioeconomy vision- 2025 with the overall aim of making India a hub for design and creation of world class biotechnology products.”

Prof Samir K Brahmachari said, “Today our country has 10 million worth of biotech industry and that none of the companies are able to cross 5000 crores. While pharma companies are easily billion dollar plus, the ecosystem for biotechnology is missing with low philanthropy. The future of biotechnology lies in promoting high value futuristic enterprises and encourage young people to create crore worth of companies and then aquire them. IoT of health is the future.”

A CII-Sathguru Report titled “Roadmap on Indian Biosimilars Industry: Roadmap to actualize global leadership” was also released at the Conclave.

This report talks about the domestic as well as global market for biosimilars focusing on the success achieved so far and roadblocks ahead.

India is poised to be the world’s largest hub for manufacturing biological drugs. It’s been evident for a decade now that biological drugs are the future of medicine. In order to realize the full potential of biosimilars, it is essential to encourage public policy and regulatory environment to support R&D that drives biosimilar innovation. In line with this, panel consisting of Pushpa Vijayraghavan, Director, Sathguru Management Consultants; Dr SR Rao, Senior Advisor, DBT; Dr Anil Koul, Director CSIR; Atin Tomar, President, CPL Biologicals Pvt. Ltd, Jaspreet Singh, Formerly Head-Biosimilars, Intas Pharmaceuticals Ltd and Sunil Thakur, MD, Quadria Capital discussed about the current state of biosimilars and prospects for the future.

Setting the context of the conclave, Dr Rajesh Jain said, “In the last five decades, the journey of the Indian biotech industry has been transformational, making it a sunrise industry for Indian growth on the global frontier. The country is currently amongst the top 12 biotech destinations in the world and ranks third in the Asia-Pacific region. The Indian biotech industry includes 800 companies, records the second-highest number of USFDA–approved plants (only after the United States), and has generated annual revenue of approximately $11.6 billion in FY2017. The potential of all growth areas of the the biotechnology sector and the associated challenges.”

Dr Mahesh Bhalgat stated, “All stakeholders of the biotechnology ecosystem need to play a transformative and catalytic role in building a US $100 billion Indian bioeconomy.”

It is reported that a significantly rising number of middle-class Indians incur losses of around $23 billion annually in treating or getting tested for NCDs. Precision medicine is the most promising economical solution for middle-class Indians. Targeted therapies aim to reduce the costs of hospice stay to markedly reduce overall financial, physical and psychological costs seen with experimental diagnosticians, precision medicine is already being practiced in several specialties like oncology, cardiology, psychiatry and diabetology. In line with this, panel discussion discussing about the opportunities and challenges as the India healthcare industry transforms towards precision medicine practices was held.

The conference also highlighted the importance of ‘Make in India’ in biotechnology sector and the National Biotechnology Development Strategy which has provided a strategic roadmap for India’s emergence as a global biotech innovation hub with a target of $100 billion by 2025.