LanzaTech has developed a gas fermentation process to make fuels and chemicals. 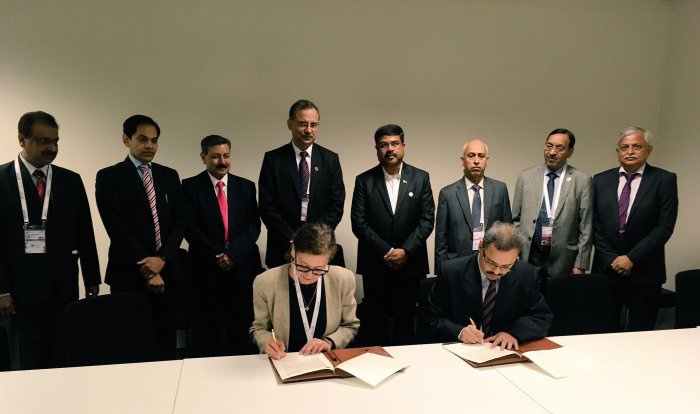 LanzaTech has developed a gas fermentation process to make fuels and chemicals. Instead of sugars and yeast, the company uses a biological catalyst to ferment waste gas emissions. The large volume of waste gas produced at industrial facilities such as refineries cannot be stored or transported; rather it must be combusted to make power locally and emitted as carbon dioxide (CO2). Power can be carbon-free, and in India today, the cost of renewable power has fallen below the cost of coal, accelerating the transition to a carbon-free grid.

LanzaTech’s technology allows refineries to divert waste gases from the grid, supporting the transition to fully renewable power while recycling this carbon into liquid fuels and petrochemicals.

India is adopting a cleaner and greener economic growth pathway, with the Government running one of the largest renewable capacity expansion programmes in the world. The implementation of the National Smart Grid Mission, along with new programmes for increasing energy capacities from wind and waste conversion, are key elements of this vision. This vision is inextricably linked to the principle of ‘need-based consumption’ which follows the need to maximize on existing resources and decarbonise everyday activities.

For liquid fuels, this is highlighted by targets initiated by the Ministry of Petroleum & Natural Gas to increase the supply of ethanol-blended petrol (E10) to all parts of the country.   Indian Oil is aligned with this Ministerial vision and is working to both reduce its overall emissions and to improve refinery yields.  For this reason,  Indian Oil has selected the LanzaTech technology which enables the beneficial reuse of carbon-rich off-gases for the production of ethanol. The ethanol produced from the recycling of refinery off-gases is expected to have a greenhouse gas emissions savings of over 70 percent compared to conventional gasoline.

The basic engineering for the 40 million litres (35K MTA) per annum demonstration facility will begin later this year for installation at  Indian Oil’s Panipat Refinery in Haryana, India, at an estimated cost of 350 crore rupees (USD 55 million).

It will be integrated into existing site infrastructure and will be LanzaTech’s first project capturing refinery off-gases. LanzaTech’s first commercial facility converting waste emissions from steel production to ethanol will come online in China in late 2017.

“India is on track to exceed its Paris commitments,” said India’s Minister of Petroleum and Natural Gas, Dharmendra Pradhan. “This is thanks to investment in novel low-carbon technologies such as this project between  Indian Oil and LanzaTech. It is promising to see carbon turned from a liability into an opportunity, where we can reduce emissions, maximise resources and decarbonise our economy.”