Semaglutide, a GLP-1 receptor analogue (GLP-1 RA), is indicated for the management of type 2 diabetes 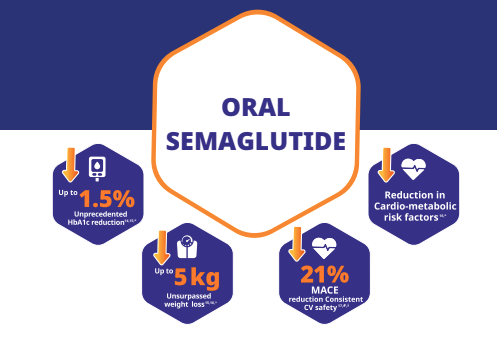 Novo Nordisk India has launched the world’s first and only 'peptide in a pill,' oral semaglutide, a gamechanger in diabetes management. Semaglutide, a GLP-1 receptor analogue (GLP-1 RA) – one of the drug classes to treat diabetes, till now was available only in the form of injections. This is the first time a GLP-1 RA has been developed in an oral formulation.

Novo Nordisk invested 15 years of continuous research, innovation, and development to make the oral formulation of semaglutide into a reality. Due to this scientific breakthrough, it received the Prix Galien Award in 2020, a prestigious award in the industry, for the best biotech innovation.

It has undergone 10 rigorous Phase 3a clinical trials called PIONEER, across several countries including India. The completed and ongoing global trials with oral semaglutide includes more than 10,000 patients of which more than 1,000 participants are from India. In addition to the unprecedented glycemic control, oral semaglutide demonstrated unsurpassed weight loss and consistent cardiovascular safety in clinical trials. Oral semaglutide has been approved by the Drugs Controller General of India (DCGI) in 2020.