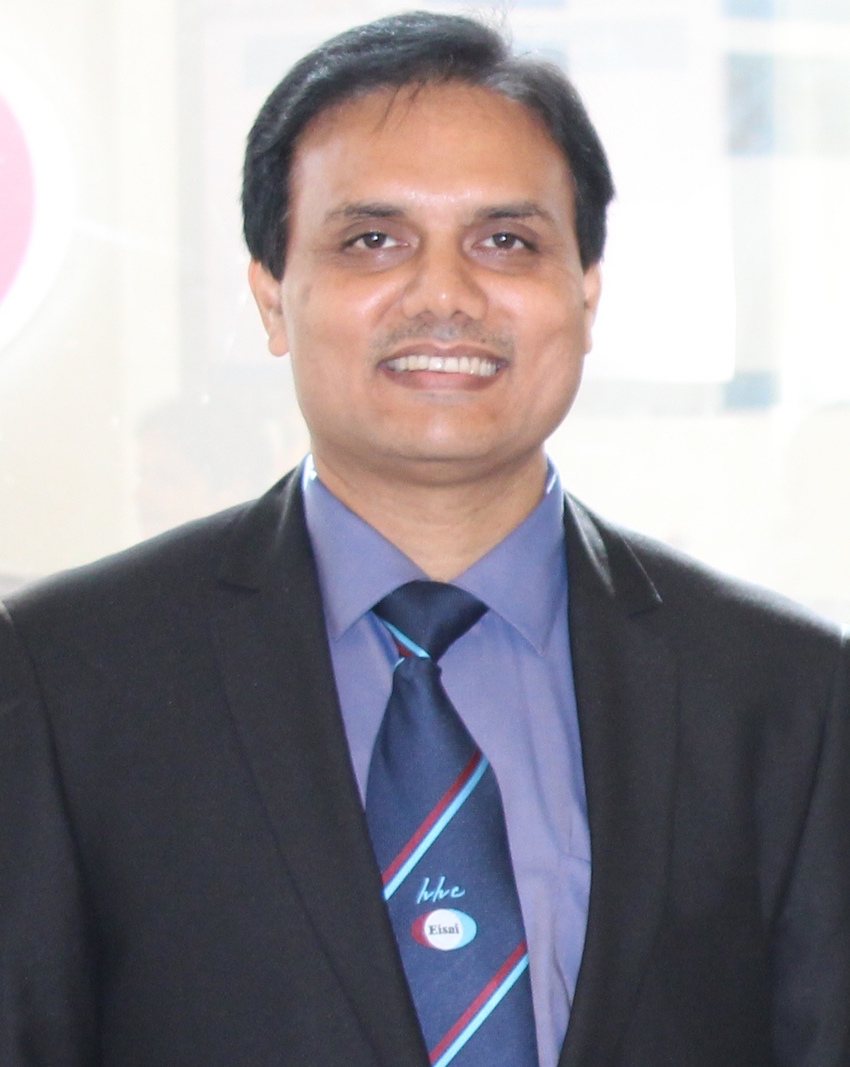 NTDs is an umbrella term used to describe a group of communicable diseases that affect over 1.7 billion people. In particular, India is home to the world’s largest absolute burden of at least 11 major NTDs. While the government is trying hard to combat this set of diseases from the country, the pharmaceutical industry is not far behind in its initiatives. Dr Girish Dixit, Executive Director & Head - Eisai Pharmaceuticals India, Vishakhapatnam spoke to BioSpectrum about how the company is fighting NTDs amidst the ongoing pandemic, and much more.

The coronavirus pandemic has had an impact on other public health issues, including Neglected Tropical Diseases (NTD). While fighting the pandemic remains a priority, how has this slowed the progress towards achieving the global goal of eliminating NTDs by 2030?

Neglected tropical diseases (NTDs) threaten more than 1.7 billion people living in the poorest and most marginalized communities worldwide. These diseases blind, disable and disfigure people, taking away not only their health, but also their chances of staying in school, earning a living, or even being accepted by their family or community.

As the COVID-19 pandemic continues to spread across the globe, we can clearly see the impact on global goals of eliminating NTD. The public health measures put in place to reduce the transmission of COVID-19 – such as lockdowns and physical distancing – have made it difficult for healthcare workers to implement NTD programmes in many endemic countries. The World Health Organization (WHO) has issued guidelines that recommend postponing high-risk activities, but which also call for continued implementation of essential NTD prevention and treatment services – a challenge for many countries. Now essential supplies, medicines, vaccines etc. have low priority and it will have long term impact on patients. These kinds of disruptions will affect global NTD goals such as mass drug administration (MDA). All global research programs will have negative impact due to lockdown and remote research and clinical activities are stand still.  NTD related funds may get diverted to more prioritised medications and this will also slow down elimination activities.

Pharmaceutical companies have been key partners in global efforts to eliminate Neglected Tropical Disease (NTDs). Eisai was one of the signatories to the London Declaration on NTDs in 2012. Can you throw some light on Eisai’s global efforts to realise these commitments?

Since London declaration, 31 countries have been certified as eliminating at least one NTDs and 500 million fewer people worldwide require active or preventative treatment.  Over 1 billion people are reached with treatment every year which is more than at any time in history.

Eisai started its journey to combating NTDs 10 years ago. In 2010, Eisai signed a joint statement with the WHO to provide 2.2 billion diethylcarbamazine (DEC) tablets by 2020 for free through the WHO. Since we did not have market authorized DEC tablets at the time, Eisai started developing DEC tablets from scratch at our facility in India and received the WHO’s Prequalification in 2013. This was the first case in the world that a drug for treatment of an NTD was prequalified by the WHO.

Under the London Declaration, Eisai has been providing high-quality DEC tablets for the elimination of Lymphatic Filariasis (LF) at Price Zero (free of charge) since 2013. In 2017, Eisai announced that it will continue to provide DEC tablets to endemic countries that need DEC until LF is eliminated in these countries. As of December 2020, Eisai has provided more than 2.01 billion DEC tablets to around 800 million people across 28 countries. Globally, total 17 countries achieved LF elimination (Eisai DEC contributed to 4 out of 17 countries).

To commemorate the 5th anniversary of the London Declaration in 2017, efforts by donor companies including Eisai were officially acknowledged in the form of a Guinness World Record for “Most medication donated in 24 hours”. The total number of treatments was 207 million. This was accomplished thanks to the combined efforts of donor company drug production facilities, including Eisai's Vizag Plant, as well as various NTD elimination partners.

Eisai has collaborated with other pharmaceutical companies donating drugs for LF, the WHO, and the Bill & Melinda Gates Foundation to develop and provide new, LF diagnostic kits for free, which do not require a temperature-controlled supply chain.

Medicine delivery at the remote part of the world is a big challenge for NTD elimination. Eisai is a member of NTD Supply Chain Forum, a unique public-private partnership consisted of the WHO, pharmaceutical companies, the Bill & Melinda Gates Foundation and non-governmental organizations (NGOs), which aims to ensure that medicines reach to the people.

30 January is the anniversary of the landmark 2012 London Declaration on NTDs, Hundreds of partners from around the globe and across sectors are committing to celebrate the second annual World NTD Day which unified partners across sectors, countries, and disease communities to push for greater investment and action on NTDs. World NTD Day not only honored this incredible show of support but will inspire and rally partners each and every year behind the fight to #BeatNTDs. Eisai being a partner is going to participate in World NTD day. By reaching everyone with the solutions we have, and investing to find the solutions we don’t, we can create a world where the 1 in 5 people worldwide who are currently at risk can lead healthy, impactful lives.

What is the current NTDs situation in the Southeast Asia region, especially in India? How do you think India’s progress against NTDs has been over these years?

Total population of Southeast Asia region is more than 1.5 billion and India alone accounts to nearly 75% of this population where in per capita income is much less as per World Bank report. Many people suffer from NTDs. Soil-transmitted helminth infections, deaths from rabies, and one-half or more of the global burden of LF, visceral leishmaniosis, and leprosy are the major burden of NTDs in this region. Dengue fever, Japanese encephalitis and Chikungunya are also health burden to Indian population.

Comprehensive programs to eliminate some of the highest prevalent NTDs are under way in South Asia. They include activities of the Global Programme to Eliminate Lymphatic Filariasis where Eisai is one of the biggest partners and providing DEC tablets. National programs of MDT for leprosy is under way. For other NTDs, national control programs of preventive chemotherapy, especially MDA for trachoma and soil-transmitted helminth infections, and efforts to vaccinate against canine rabies are being considered to better coverage and control. Among the new control tools underdevelopment that could facilitate NTD and other disease elimination efforts are new or improved vaccines under development for cholera, dengue fever, hookworm infection, leishmaniosis, and malaria. There is an urgent need for better surveillance and disease burden assessments for most of the NTDs, but especially for amebiasis, leptospirosis, and the major virus infections, and for linking MDA, vaccinations, integrated vector management, and improved surveillance together as part of overall efforts to strengthen health systems in the region.

The government has taken up the elimination of NTDs on a war footing especially with the Lymphatic Filariasis elimination target of 2021. How do you think India based pharmaceutical companies can support the government in its endeavour?

Since the launch of the Global Program to Eliminate Lymphatic Filariasis (GPELF), India has adopted prevention strategy through MDA using combination of two anti-filarial drugs and providing Morbidity Management and Disability Prevention (MMDP) services to those affected by the disease. Renewing India’s commitment towards elimination, the Government launched the Accelerated Plan for Elimination of Lymphatic Filariasis (APELF) in 2018, and later rolled out triple drug therapy known as IDA treatment in a phased manner as part of intensifying efforts towards elimination. We strongly feel that Indian pharmaceutical companies can jointly collaborate with Indian institutes on several research themes targeting NTDs and bring cost effective treatment in timely manner. We at Eisai are committed and manufacturing DEC tablets and supporting MDA programs run by government. Due to recent pandemic, all the above-mentioned measures have seen a slowdown, but Indian pharmaceutical organisations always feel this as corporate social responsibilities and will keep supporting government efforts for elimination of NTDs.

Eisai has been supporting the government by donating diethylcarbamazine (DEC), one of the drugs administered to prevent transmission of Filariasis amongst endemic population during Mass Drug Administration (MDA) rounds. How has the ongoing pandemic impacted these efforts? What are the measures taken by Eisai to overcome these challenges?

Definitely there is an impact on mass drug administration program, as priority related to pandemic can’t be ignored at this situation. But we expect no impact on patients suffering from LF. From Eisai’s perspective, we are keeping enough inventory and ensuring all raw materials required for DEC are available within no time. Eisai is continuously manufacturing DEC tablets and doesn’t want to allow any hindrance in stable supply by solving any obstructs working with partners. Local Eisai employees are cooperating with the WHO, local governments, and non-governmental organization (NGO) partners to support local elimination efforts, through MDA, disease awareness campaigns, improvements in sanitation, and other activities. Virtual awareness and LF support sessions with adopted villages are confirming our serious support for the elimination of LF.

(Details of DEC manufacturing and Supply for Eisai DEC tablets)

From FY 20, Supply of DEC Tablets to India is affected due to change in the custom tax.

Investments in R&D are necessary to develop newer drugs and tools and are critical to realise the NTD elimination goals. What role can pharmaceutical companies play in this regard?

There are many investments proposed in R&D services globally and several pharmaceutical companies are collaborating their efforts to bring single dose therapies for NTD elimination. Eisai is participating in many global health innovative programs with international research institutes. For instance, Mycetoma is one of the most neglected NTDs. Cases are reported from Sudan as well as India, however, still kept unclear in many aspects. Eisai is collaborating with the Drugs for Neglected Diseases initiative (DNDi) and research institutes to create new treatment for Mycetoma, and currently a clinical study is ongoing in Sudan.  We hope that our efforts contribute to develop new treatments, which will have positive impacts on patients suffering from NTDs in future.

Apart from donation of drugs, what are the other areas that Eisai is exploring to work closely with the government to achieve LF elimination goals?

Eisai India believes that to achieve LF elimination, supporting MDA with providing DEC tablets is not the only solution, and developing disease awareness, supporting sanitation and infrastructure is also important. Based on our corporate philosophy human health care (hhc), Eisai employees in LF endemic countries have been cooperating with the WHO, local governments, and non-governmental organizations (NGOs) to support local elimination efforts, through disease awareness campaigns, improvements in sanitation and other activities.

Besides supporting the elimination activities, Eisai is supporting prevention and management of disability for LF patients who already have the disease. Eisai conducts socialization program with patients to understand their pain and concerns.