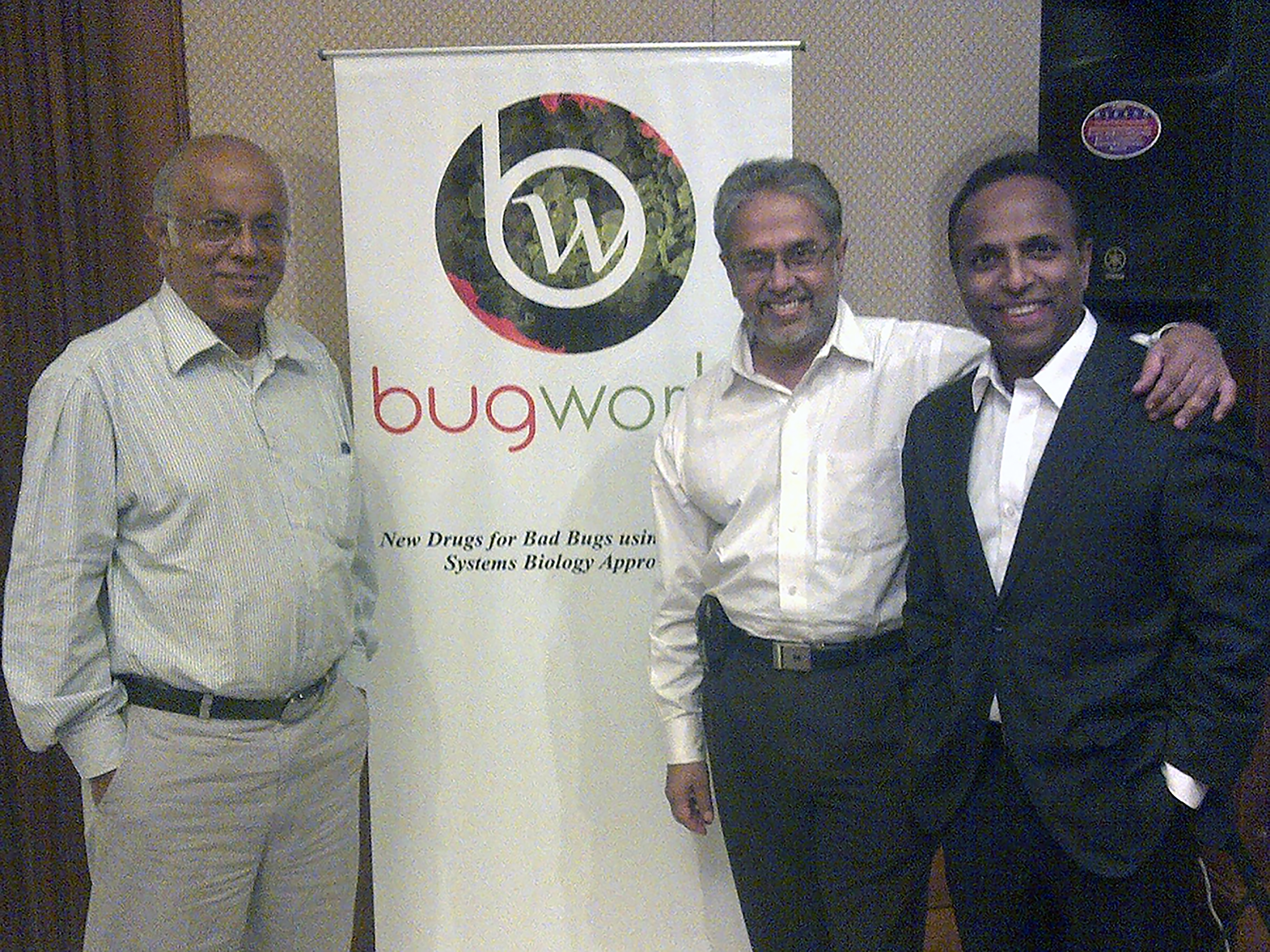 Cellworks is said to be the first company in India to use systems biology to study drug-disease interactions, and solving key issues in cancer drug discovery. It is an amalgamation of diverse areas such as mathematics, simulation, biochemistry and pharmacology in studying tumors, enabling creation of personalized medicine for cancer. Located in California, USA, and Bangalore, India, it was funded by investments from Artiman Ventures and Sequoia Capital.

The genesis of Bugworks began at Cellworks while the team started working on infection portfolio. In 2013, the Cellworks team wanted to focus its attention on a large unmet medical need with high mortality rates.

Their quest pointed them towards hospital-acquired infections.

These infections are picked up by people in hospitals through gram-negative bacterial contaminations, which are hard to kill and have greater drug resistance attribute.

"Decades have passed by and drug resistant superbugs are becoming superior and smarter with higher mortality rates, with no available treatments to combat them effectively. Not many companies are working in this area, and we thought this would be the perfect stop for us to start," reveals Dr Anand Anandkumar, CEO, Bugworks, who also serves as the external director and chairman of the board of directors of the Cellworks' India operations.

He says that patients are being bombarded with antibiotics for a certain period thereby bolstering the resistance rates causing a big void in finding new mechanisms fighting them. "Emerging countries are at the worst. India is a worst offender in the world. Antibiotic abuse happens in agriculture, poultry and medical stores because of their low-cost availability," he adds.

Along with him, the company was co-founded by Dr V Bala Subramanian, serving as the president and Dr Santanu Datta as the chief scientific officer (CSO) of Bugworks, both of them hailing from a rich, two-decade-plus research experience at AstraZeneca India.

While at AstraZeneca India, the former held major leading roles working on infection research and anti-bacterial drug discovery, the latter worked as a principal research scientist on infectious diseases with a focus on Malaria and Mycobacterium tuberculosis (MTB).

Dr Anand continues, "The need is so bad because of the drug resistance in bacteria due to antibiotic abuse and lack of new drugs. The bugs have become used to existing drugs. There are not many drug discovery companies ready to invest in fighting the antibiotic-resistance."

The last antibiotic widely used was Colistin, discovered in the 1950s. However, during the 70s, use of Colistin was stopped especially in the US because of its toxicity.

"The last mechanism introduced for gram-negative bacteria was way back in the 60's. We have not had new antibiotic class for a long time," says Dr Bala Subramanian.

Incubated at C-CAMP (Centre for Cellular and Molecular Platforms), Bugworks is located in Bangalore and Delaware, USA, employing close to 20 top-class professionals with diverse backgrounds.

Dr Bala explains, "The treatment for tuberculosis (TB) is a combination. We wanted to build a combination from all the existing available drugs in a rational manner. There are 18 different TB drugs, and we looked at 4 drug combinations, which led to 2 million combinations. This is where simulation comes to play. We built a computational model to probe all the 18 mechanisms and know the top combinations that can effectively arrest TB growth. We have had a successful collaboration with AstraZeneca in this regard, and now were able to identify 5 new drug combinations."

The company has created a dynamic map of the bacteria, capable of exactly knowing where to block to stop its growth.

"From that map, we can figure out where to block it with pinpointing accuracy," Dr Santanu voices.

Dr Anand states that Bugworks will continue to work on TB but its focus will heavily be on hospital-acquired infections, and he says not much noise or awareness is made in this space. "We are looking for new mechanisms for antibiotics for gram-negatives, and new methods to prevent the formation of biofilms in medical devices," he notes.

Biofilms are formed when microorganisms adhere themselves to the surface of objects, including medical devices. "In a way, we have a biopharmaceutical play, and potentially devices play too," says Dr Anand with excitement.

In less than two years, Bugworks has bagged 4 grants - 1 international and 3 DBT-sponsored. "It has helped us with the cashflow in the company. We have won grants worth $300,000," he shares.

The company, in 2015, was awarded as the 'Emerging Company of the Year' by ABLE (Association of Biotechnology Led Enterprises).

At the moment, Bugworks has completed pre Series A round funding. "We will enter the market for Series A in about 12 months from now. The company has raised equity worth $2.3 million through angel investors," Dr Anand remarks.

Bugworks is in in talks with large, world-class companies in the biopharmaceutical space for potential collaborations.

"We are looking for collaborations with innovation-focused companies. Collaborations, for example, with big pharmas who can take our early proof-of-concept (PoC) and move up further. Our current collaborations are with universities, NCBS (National Centre for Biological Sciences) and a group in New York," opines Dr Anand.

Dr Bala says that the company's expansion will purely depend on its partnerships. "It's too early to comment or forecast on our expansion. Firstly we want to take our offerings and make them available to population around the world. The 'where' and the 'how' depends on how we partner. Our products are not designed particularly for the Indian or Chinese markets. It's a global market out there."

"We are proud to partner with BIRAC. They have been supportive of early-stage, high-risk and high-innovation companies with unique methodologies. The Government has been supporting very well, especially in the last 5 years. Without the DBT's support initially, Bugworks wouldn't exist today. The support was not just in terms of fundings but also the much-needed infrastructure as well," he expresses.

According to Dr Anand, India has got talent on par with talent pool in Boston and Silicon Valley. "In the last few years, the ecosystem is getting stronger, compared to how it was 7 or 8 years ago. The only missing piece is we don't have good PEs, VCs or angels, who have the patience to put their money in this space. We have very few success stories in the country," he points.

He emphasizes start-ups to have a strong, extraordinary team. "Everything boils down to the extraordinariness of the team. Up to series A, the funding purely depends on the strength of the team. It is good to have a 3 to 4-membered team from diverse backgrounds. Keep your eyes on the US markets, and having a founder who has good connections in the US is worth it. Entrepreneurs need to understand IPs, the problem they solve, its magnitude, the uniqueness of solution and the funding dynamics," he advices.

He also adds that entrepreneurs need to have great patience and appetite for risk. "This is more like a marathon. At an individual level, being open to ideas and inputs coming in from all directions is important. One should be receptive to influences and possess tenaciousness. We have worked with very less or no salary at times. That's part of the risk appetite, or else it doesn't make sense to get into this game," Dr Anand clarifies.

When it comes to the core team, Dr Bala says that it is not about the interplay of different skillsets. "We also bring in different emotional quotients, and a mix of optimism and pessimism as well. It is a heterogeneous group where we challenge each other. It's more than technical skillsets. It is also about emotional quotient," he mentions.

For Bugworks, it took a year and almost 100 presentations to close its funding round.

"Today investors are flocking towards food delivery and ecommerce start-ups. Nevertheless, we have a big opportunity at hand and seems very fulfilling scientifically, emotionally, socially, and financially. It's a social problem that we are solving. That's where it gets exciting," concludes Dr Santanu.